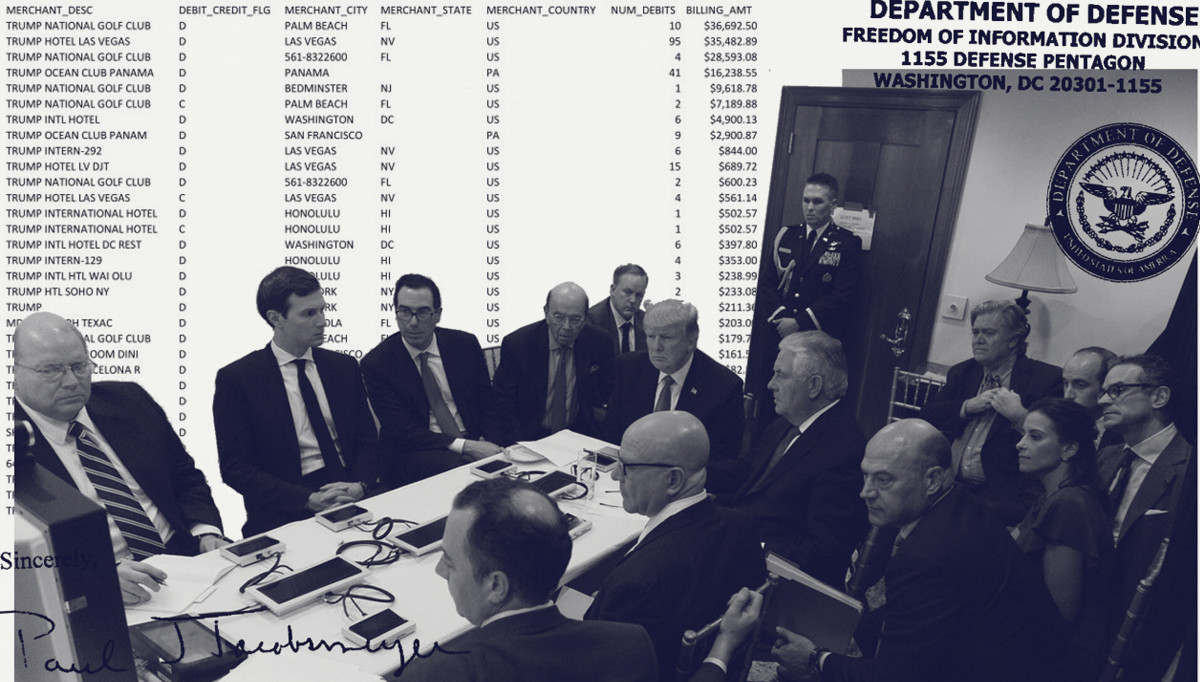 Washington, DC — A Freedom of Information Act (FOIA) lawsuit from the transparency organization Property of The People has produced receipts and other documents revealing Department of Defense (DoD) expenditures at Mar-a-Lago and twelve Trump properties during the President’s first six months in office.  The expenses, each made with DoD charge cards, raise serious questions as to whether Donald Trump is violating the Domestic Emoluments Clause of the United States Constitution.

Among the documents released today is an 8-page summary chart provided by the Department of Defense outlining the majority of $138,093.23 in DoD charges at Trump properties beginning on the first day of the administration, January 20, 2017, through June 14, 2017. The release also includes a 369-page document with receipts corresponding to a selection of the charges outlined in the summary chart.  Among the charges were $58,875.69 in charges incurred specifically at Mar-a-Lago; $9,618.78 at Trump’s Bedminster, NJ Golf Club during an extended weekend stay in May, 2017;  $35,652.44 spent at Trump’s Las Vegas Hotel; and $17,102.55 in DoD expenditures at Donald Trump’s beleaguered Trump Ocean Club in Panama.

The FOIA lawsuit that obtained the receipts was brought by Property of the People and the organization’s co-founder, MIT FOIA researcher Ryan Shapiro.  The group and Shapiro have filed similar FOIA requests with The US State Department, Department of Commerce, General Services Administration, US Coast Guard, Department of Homeland Security, Secret Service, and US Customs and Border Protection.

In September 2017, documents obtained by Property of the People from the Coast Guard and DHS revealed National Security Council and other agency  payments to Mar-A-Lago and Trump Hotels. These documents provided the first strong evidence of Trump’s violation of the Domestic Emoluments Clause.  These revelations also informed Senators Gary Peters, Elizabeth Warren, and Tom Udall’s decision to introduce the HOTEL Act — Heightened Oversight of Travel, Eating and Lodging — banning executive officials from staying at any property owned by the president, vice president, Cabinet secretaries or their families members.

And last month, documents released by the General Services Administration (GSA) to Property of the People highlighted $1,760.46 in charges made by the GSA across three days in 2017 at the Trump International Hotel in DC and the BLT Prime Restaurant located within the DC Trump Hotel.

“Donald Trump views the American public as a bunch of marks waiting to be fleeced,” said Property of the People co-founder, Ryan Shapiro. “With the DoD’s spending at Mar-a-Lago and other Trump properties, and Trump’s refusal to divest from his sprawling business empire, once again we find the President’s hand deep in the taxpayer’s pocket.”

Continued Shapiro, “Trump’s venality and his administration’s open contempt for transparency creates a functionally unprecedented potential for conflicts of interest and corruption.”

Added Property of the People staff attorney, Gunita Singh, “Repeatedly, our FOIA litigation has revealed blatant financial conflicts of interest resulting in the transfer of taxpayer dollars to Trump properties and likely constitutional violations. We expect this is only the tip of the iceberg, and we fully intend to aggressively continue our FOIA work exposing kleptocracy at the highest reaches of government.”

As part of the the organization’s efforts to seek transparency and accountability from the Trump administration, Property of the People has thousands of FOIA requests in motion with numerous federal agencies, as well as numerous active federal FOIA lawsuits to compel agency compliance with the organization’s requests.