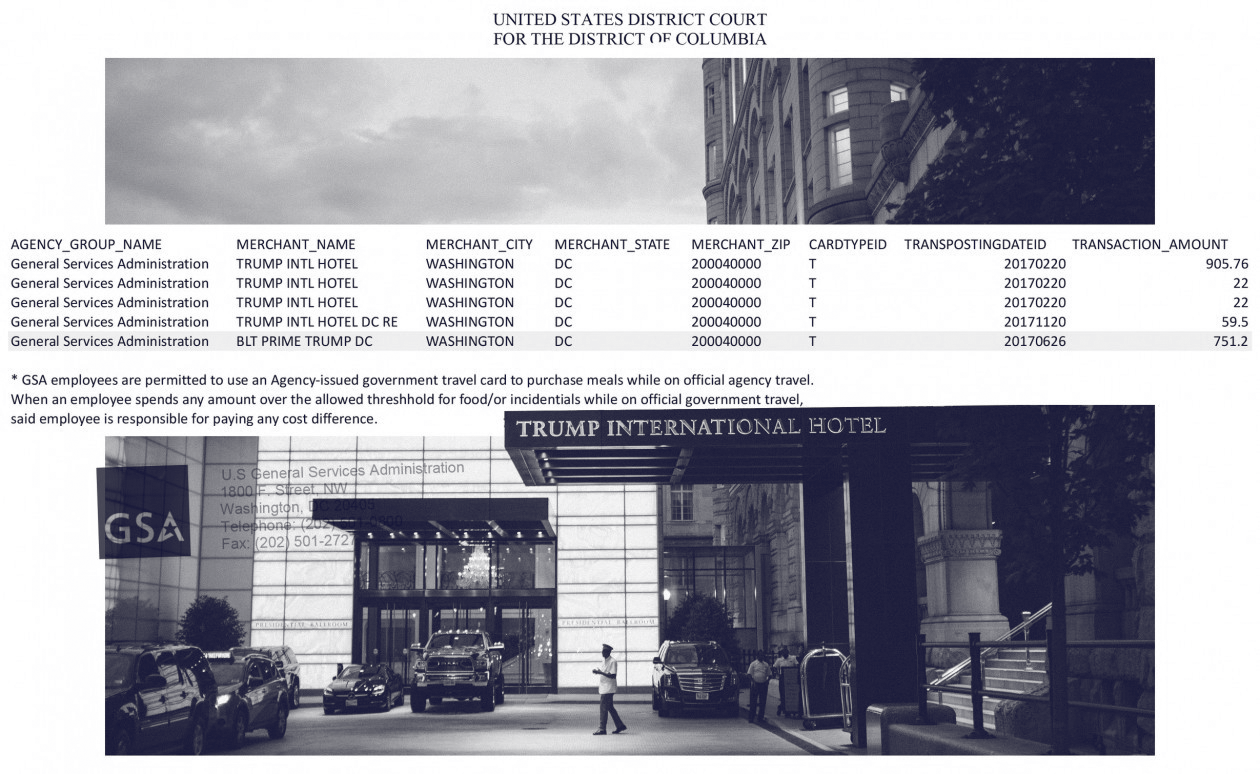 As court arguments in the District of Columbia and Maryland litigate whether patronage by state governments and foreign countries at The Trump International Hotel in DC violates the US Constitution, a Freedom of Information Act (FOIA) lawsuit from the transparency organization Property of The People has now produced receipts revealing expenditures at the Trump International Hotel by The US General Services Administration (GSA), the agency responsible for administering the travel charge card program for all federal agencies.

As quoted on CNN.com, who first reported the story, Property of the People co-founder Ryan Shapiro states: “Regardless of how much he makes on any individual transaction, the President is sending a signal that the White House is open for business. Due to his refusal to divest from his sprawling business empire, Donald Trump has turned the American presidency into a racket.”

The FOIA lawsuit that obtained the receipts was brought by Property of the People and MIT FOIA researcher Ryan Shapiro.  The group and Shapiro filed similar FOIA requests with The Department of Commerce, Department of Defense, State Department, Coast Guard, Department of Homeland Security, Secret Service, and US Customs and Border Protection.

In September 2017, documents obtained by Property of the People from the Coast Guard and DHS revealed National Security Council and other agency  payments to Mar-A-Lago and Trump Hotels. These documents provided the first strong evidence of Trump’s violation of the Domestic Emoluments Clause.  These revelations informed Senators Gary Peters, Elizabeth Warren, and Tom Udall’s decision to introduce the HOTEL Act — Heightened Oversight of Travel, Eating and Lodging — banning executive officials from staying at any property owned by the president, vice president, Cabinet secretaries or their families members.

The document just released by GSA to Property of the People, a microsoft .xls file, highlights $1760.46 in charges made by the GSA across three days in 2017 at the Trump International Hotel in DC and the BLT Prime Restaurant within the DC Trump Hotel.

As part of the the organization’s efforts to seek transparency and accountability from the Trump administration, Property of the People has hundreds of FOIA requests in motion with numerous federal agencies, as well as numerous active federal FOIA lawsuits to compel agency compliance with the organization’s requests.