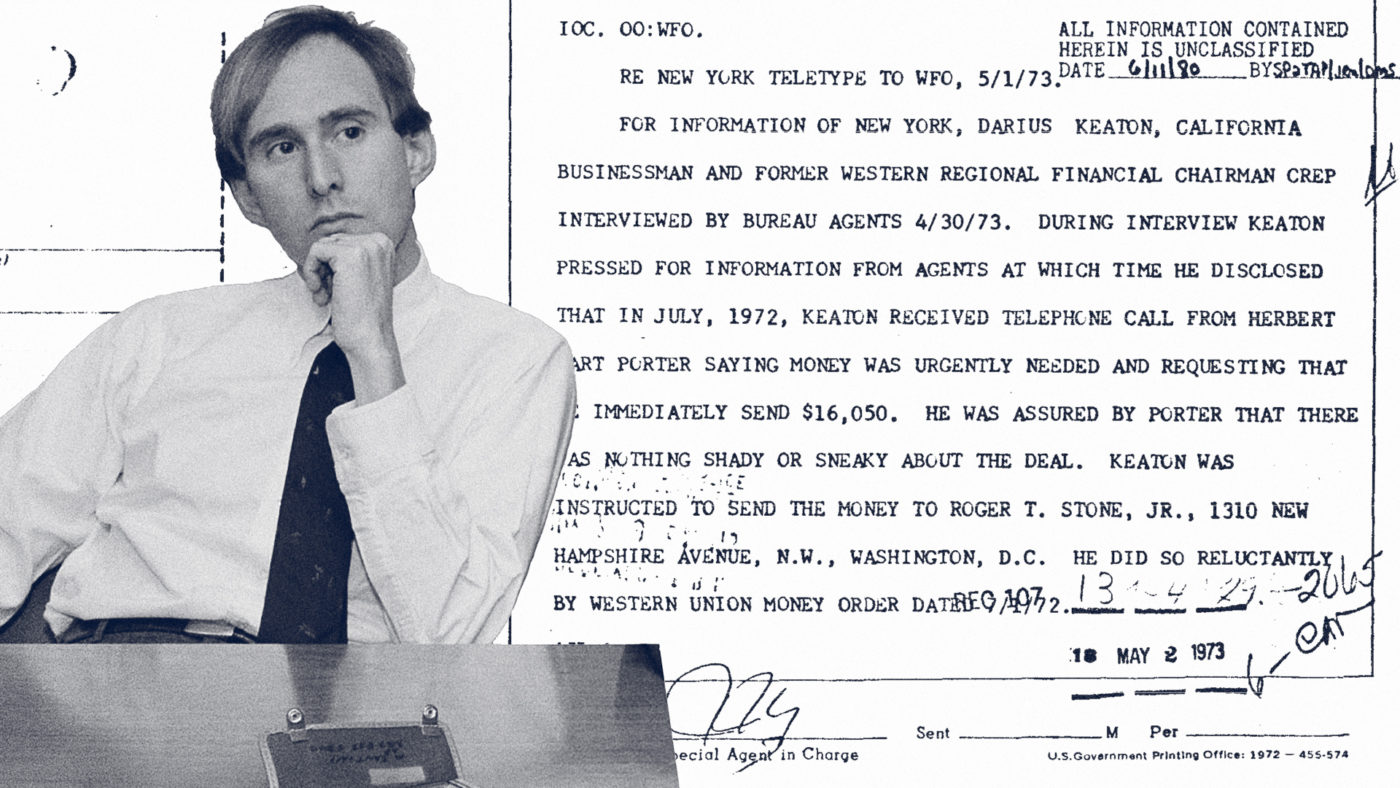 Longtime Trump associate Roger Stone took to social media last week appealing for donations to his legal defense, announcing he expects special counsel Robert Mueller will soon charge him with a federal crime. Time will tell whether Stone is sincere or if this too is just another one of his laundry list of publicity stunts. However, FBI documents obtained by Freedom of Information Act (FOIA) researcher Emma Best and shared with Property of the People illustrate Stone has a long history of finding himself entangled in FBI investigations into election meddling, political sabotage, and espionage.

Today, Property of the People is making these 10 previously unreported FBI documents available to the public. The documents detail Roger Stone’s role as a bagman for the Nixon campaign, in which he funneled over $25,000 (equivalent to $150,000 in 2018) to fund political intelligence gathering and other dirty tricks, including mole embedding and a mysterious payment related to the Watergate break-in. The documents include a copy of the FBI’s interview with Stone, as well as others’ statements to the Bureau about Stone and Jason Rainier, the alias Stone used for his anti-Democratic spy operations.

The FBI restricted access to Stone’s file for decades, even denying a request for the file from Sen. Bob Dole, for whom Stone worked after his time with Nixon. When the documents were finally released in redacted form, they were buried amid 17,000 other pages of records on Watergate.

According to the documents, in one of his earliest acts for Nixon’s Committee to Re-elect the President (CREEP), Stone travelled to Massachusetts with a duffle bag containing a jarful of cash intended to fund acts of political sabotage. Stone then recruited an operative and funneled approximately $10,000 (equivalent to $60,000 in 2018) to that operative to pay for surveillance of Democrats and sabotage of Democratic campaigns.

Roughly two weeks after the Watergate break-in and arrests, Stone served as Nixon’s bagman yet again. This time Stone funneled $16,050 (equivalent to $95,000 in 2018) in a mysterious payment from Darius Keaton, an oil executive and fundraiser for Nixon, to Herbert “Bart” Porter. Porter was Stone’s handler with CREEP, as well as the man responsible for paying both Stone and Watergate burglar G. Gordon Liddy. Stone informed the FBI only that he remembered the payment was more than $1,000. However, Keaton provided the FBI with a receipt for Stone’s Western Union money order, confirming the amount was an order of magnitude greater than what Stone suggested to the Bureau. Notably, Keaton was indicted several years later on insider trading and fraud charges in connection with the sale of his oil company to the Kuwaiti government.

According to the documents, two days after the Watergate break-in and arrests, Watergate burglar and former CIA security officer James McCord called Porter’s home. Stone was dog sitting for Porter at the time and answered the phone, informing McCord that Porter was not present. Stone quickly alerted Porter to the call — calling it a matter of “life and death”. The following day, a second CREEP official questioned Stone about the call.

The FBI documents include a list “highlights” of acts of political sabotage in which Stone was either directly involved or served as the handler for the relevant operative. In one case, Stone sent 200 Democrats invitations to a non-existent primary campaign breakfast. In another, Stone directed Democratic campaign literature intended for the black community to be sent to union workers, and literature intended for union workers to be sent to the black community. In yet another, Stone saw to it that phone lines used by a Democratic primary campaign were tampered with. This resulted in Democratic failure to contact many potential voters, while others were potential voters were inadvertently contacted “numerous times.” In still another instance, Stone made a phony donation from the Young Socialist Alliance to create and exploit divisions among Democrats.

Among other highlights, the FBI documents establish that Stone: