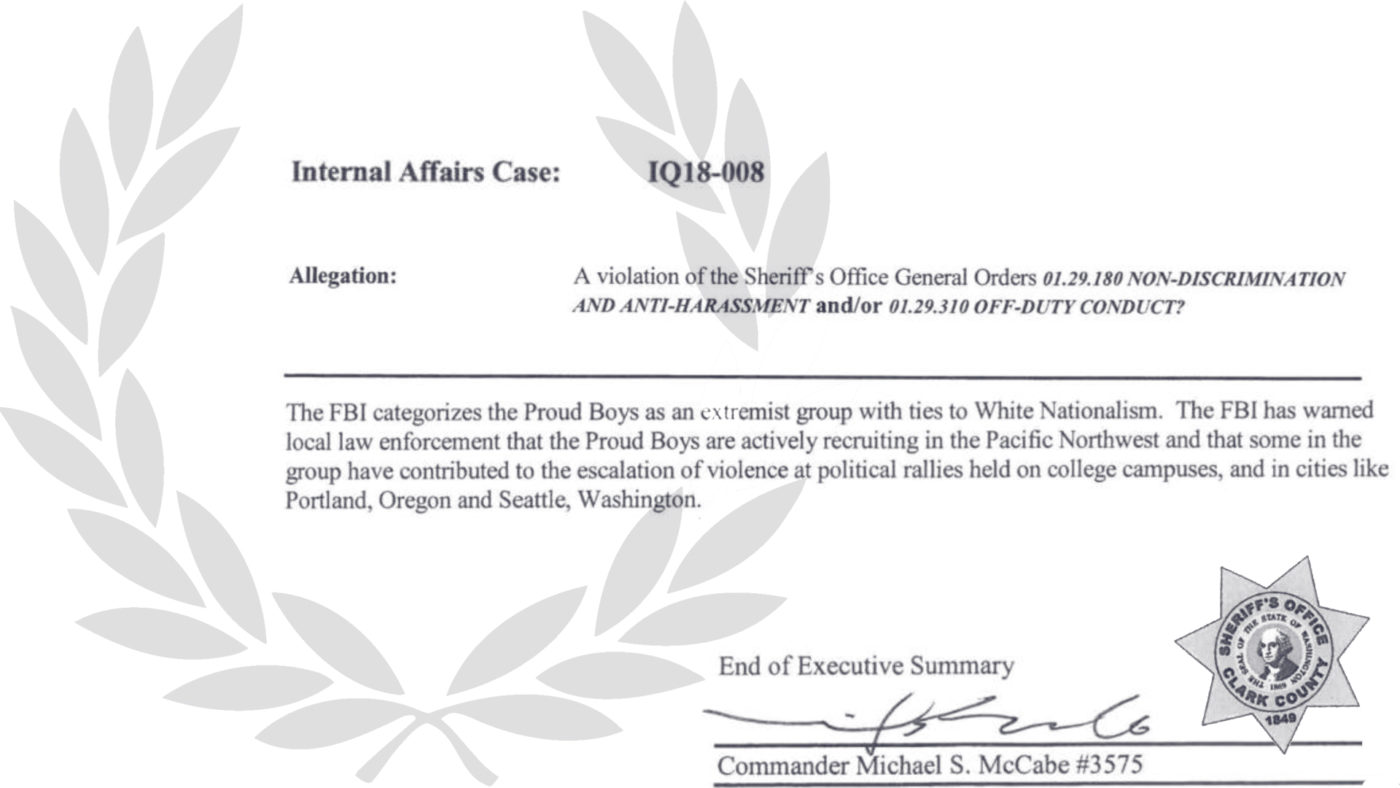 A sheriff’s department internal affairs report obtained and published by Property of the People and the Sparrow Project reveals the FBI categorizes the Proud Boys as “an extremist group with ties to White Nationalism.”

The report, produced by the Clark County Sheriff’s Office in Vancouver, Washington, details an internal investigation that ultimately culminated in the termination of Deputy Sheriff Erin Willey. The investigation found Deputy Willey’s affiliations with the Proud Boys, and her production and sale of Proud Boys’ Girls merchandise benefitting the group, violated the Sheriff’s Office’s policy on non-discrimination and anti-harassment (General Order 01.29.180).

According to the Internal Report: “The FBI categorizes the Proud Boys as an extremist group with ties to White Nationalism.  The FBI has warned local law enforcement that the Proud Boys are actively recruiting in the Pacific Northwest and that some in the group have contributed to the escalation of violence at political rallies held on college campuses, and in cities like Portland, Oregon and Seattle, Washington.”

The Report Continues: “The Proud Boys were publicly categorized as an extremist group by the FBI in 2018 and a Hate Group by the Southern Poverty Law Center in 2018.”

The Report Further Continues That: Though the FBI failed to initially designate the Proud Boys as an extremist group with close ties to White Nationalists, “upon closer examination of publicly available source materials and publications, the Proud Boys at its foundation were transparent about what they believed in and what they promoted.”

The Report Also Notes That: The Proud Boy Girls “exist to support their Proud Boys, and are often seen posting approval and supportive comments on social media sites after Proud Boy clashes with Antifa[.]”

Additionally: The Clark County Sheriff’s Office began its investigation of Willey after The Columbian received a photograph of Willey in a Proud Boys’ Girls sweatshirt alongside a photograph of her in her Sheriff’s Office uniform.  According to the investigation’s findings, the photographs were sent by Graham Hayden Jorgensen, Willey’s abusive ex-boyfriend and active Proud Boy in the Vancouver region. Court records indicate Jorgensen sent text messages indicating he hoped Willey would die or get injured on the job. Jorgensen was arrested on domestic violence charges earlier this year.

According to Ryan Shapiro, Executive Director of Property of the People: “The FBI’s failure to initially identify the Proud Boys as a violent organization allied with White Nationalists is hardly surprising given the FBI’s long record of targeting social justice activists as terrorists while turning a blind eye to the threat posed by the radical right.”