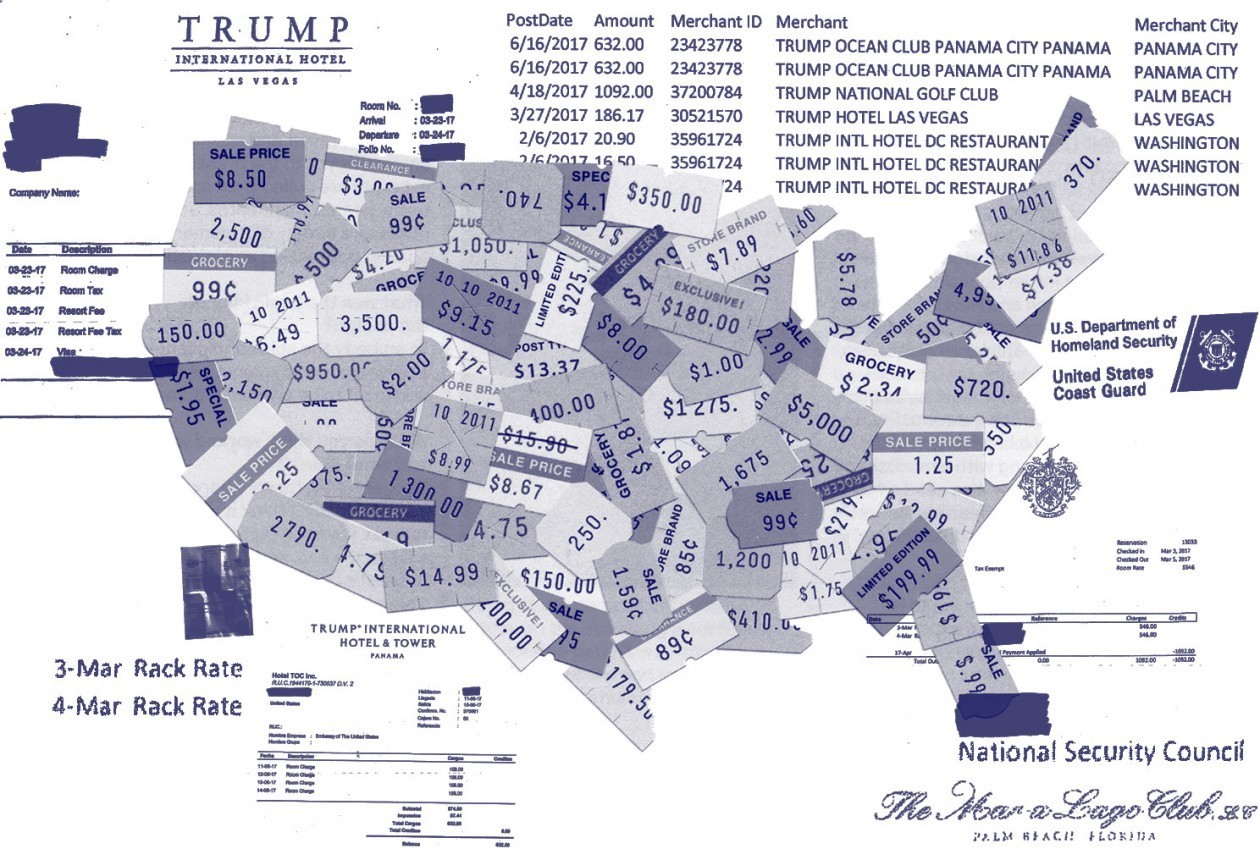 As reported in the Washington Post, new FOIA-obtained documents show the White House National Security Council (NSC) paid over $1,000 for an unidentified guest to stay two nights at Donald Trump’s luxury resort Mar-a-Lago. This payment, made with a U.S. government charge card, constitutes the first documented violation by President Trump of the Constitution’s Domestic Emoluments Clause. President Trump owns 99.99% of Mar-a-Lago, LLC directly, and the company’s profits are held in a revocable trust from which Trump may withdraw funds without restriction.

As the Washington Post writes, Property of the People’s work “offers one of the first concrete signs that Trump’s use of Mar-a-Lago as the ‘Winter White House’ has resulted in taxpayer funds flowing directly into the coffers of his private business.”

Today, we are calling upon the Department of Justice to investigate this constitutional violation.

Trump’s refusal to divest from his business empire has resulted in Trump’s violation of the Constitution’s anti-corruption Domestic Emoluments Clause. This provision prohibits the President from receiving emoluments (profitable payments, benefits, or advantages) paid by federal or state governments, beyond the salary approved by Congress.

A receipt from Donald Trump’s luxury Palm Beach resort Mar-a-Lago showing that the White House National Security Council was charged $1,092.00 for a guest to stay at the resort on March 3, and 4 of 2017. A copy of this invoice and several others can be reviewed in full HERE.

In the past, presidents possessing significant business holdings have divested themselves of their holdings or placed them into a blind trust prior to assuming office. President Trump, however, has adamantly refused to do either. Instead, Trump has placed his business empire into a revocable trust administered by his sons, a move that has been widely viewed by experts as insufficient. This trust is set up to allow Trump to withdraw any amount of money at any time for any reason “at his request.”

The released documents show that Mar-A-Lago charged the NSC full price for the rented room instead of offering the NSC a discounted rate covering only the resort’s costs. The NSC receipt lists the rate paid by the National Security Council as the “rack rate,” meaning the standard, non-discounted rate for the room. As such, the NSC’s payment to Mar-A-Lago constitutes a direct, profitable payment from a U.S. government agency to a business personally owned by Donald Trump. This is strong evidence of a violation by President Trump of the Domestic Emoluments Clause of the U.S. Constitution.

A receipt from Donald Trump’s exclusive Trump Ocean Club International Hotel & Tower in Panama showing that the US Embassy was charged $632.00 for a 4 night rental at the tower in June, 2017. A copy of this invoice and several others can be reviewed in full HERE.

Property of the People also obtained invoices showing payments by the United States Embassy to Trump’s hotel in Panama, and documentation of payments by unidentified federal employees to Trump’s Washington, D.C. and Las Vegas hotels. These payments were all made on official U.S. government charge cards. They were obtained through Property of the People’s FOIA request to the United States Coast Guard, which administers the charge card program for the Department of Homeland Security.

According to Property of the People Director Ryan Shapiro:

“These documents represent perhaps the clearest evidence yet that President Trump has violated the Domestic Emoluments Clause of the U.S. Constitution. The likely constitutional violation here belongs in any forthcoming articles of impeachment. Due to his glaring refusal to divest from his sprawling business empire, the President has no one to blame but himself.”

Shapiro and Property of the People are also calling on the Department of Justice, which has jurisdiction over potential violations of the Domestic Emoluments Clause, to investigate. Says Shapiro:

“These invoices are strong evidence of a constitutional violation and they warrant a thorough investigation by the Department of Justice.”

The complete set of documents obtained by Property of the People show that: